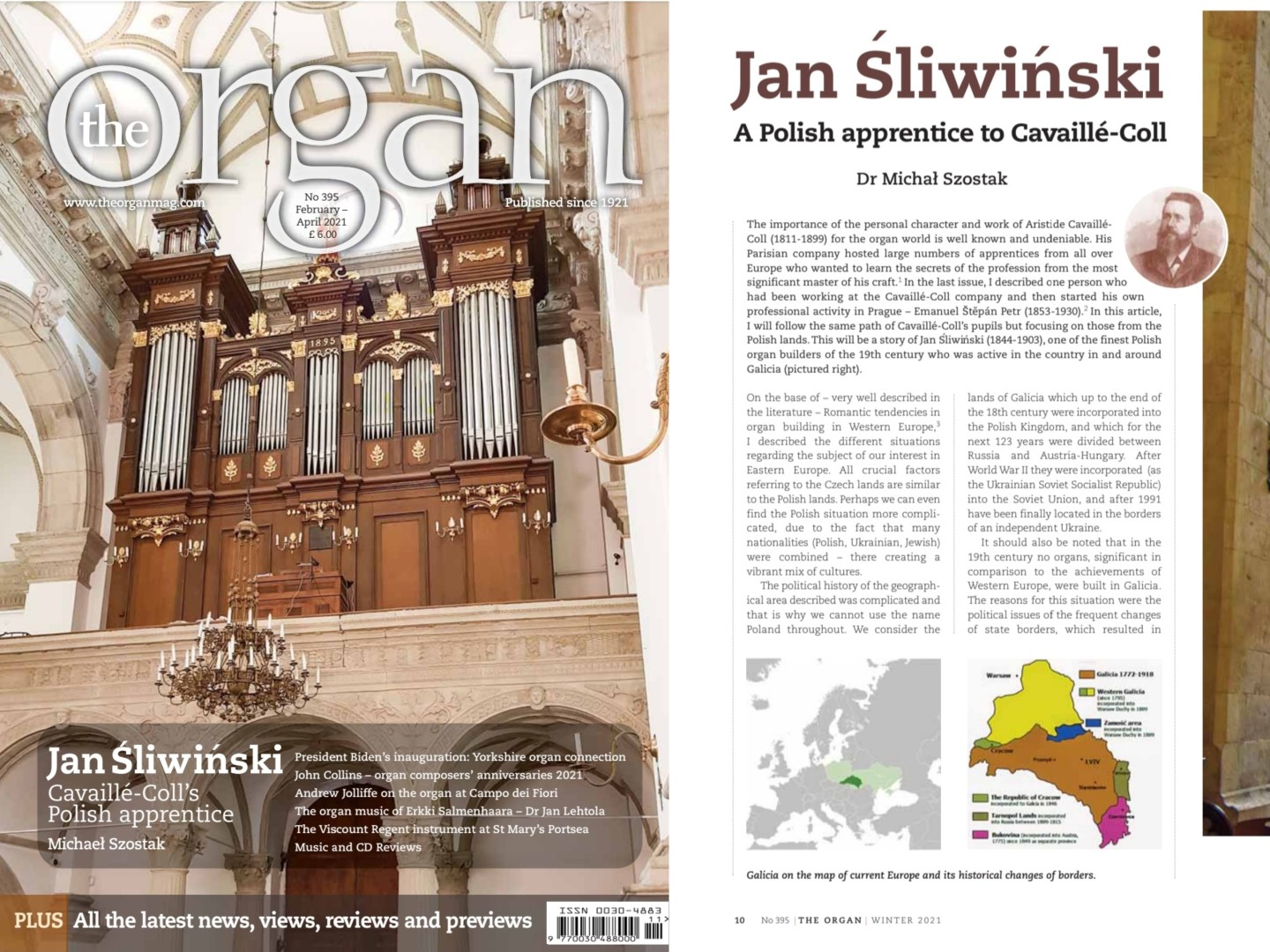 The importance of the person and work of Aristide Cavaillé-Coll (1811-1899) for the organ world is well known and undeniable. His Parisian company hosted large number of apprentices from all over Europe who wanted to learn the secrets of the profession from the best here[1]. In the last issue, I described one person who had been working at Cavaillé-Coll company and then started his own professional activity in Prague – Emanuel Štěpán Petr (1853-1930)[2]. In this article, I will follow the same path of Cavaillé-Coll’s pupils but focusing on the Polish lands. This time, it will be a story of Jan Śliwiński (1844-1903), one of the finest Polish organ builders of the 19th century being active in lands of Galicia.

On the base of – very well described in the literature – Romantic tendencies in organ building in Western Europe[3], I described lately the different situation regarding the subject of our interest in Eastern Europe. All crucial factors referring to the Czech lands are similar to the Polish lands. Perhaps, we can even find the Polish situation more complicated due to the fact that many nationalities (Polish, Ukrainian, Jewish) were combined there creating a vibrant mix of cultures.

The political history of the described geographical area was complicated and that’s why we cannot use the name Poland here. We consider the lands of Galicia which up to the end of the 18th century were incorporated into the Polish Kingdom, for the next 123 years were divided between Russia and Austria-Hungary, after World War 2 were incorporated – as the Ukrainian Soviet Socialist Republic – into the Soviet Union, and after 1991 has been finally located in borders of independent Ukraine.

It should also be noted that in the 19th century no organs significant in comparison to the achievements of Western Europe were built in Galicia. The reasons for this situation were following: 1) Political issues in the form of frequent changes of state borders, which resulted in administrative and ownership consequences; 2) Property issues in the form of limited resources of the population, which were exploited by the partitioning powers as capture areas and from which all resources were used before the lands would fall into the hands of enemies; 3) Cultural and religious issues in the form of treating the organs as strictly liturgical instruments without concert inclinations.

All these elements contributed to the limited size, the lowest possible price and high reliability to reduce maintenance costs – implies Galician instruments were mainly small organs (1- or 2-manual), devoid of expensive reed stops. Everything indicates that the local organ builders had the technical capacity to build larger instruments but the political, social and economic situation inhibited the implementation of such undertakings effectively. This argument is supported by the fact that there was a short distance and easy accessibility to large organ factories, such as the Rieger Brothers from Krnov, and yet the lack of large instruments of this company in Galicia in the discussed period[4].